Four Steps to March Forth on March 4th

SALT LAKE CITY, March 3, 2022 /CNW/ -- Because March 4 is associated with marching forth, it is the perfect date to motivate oneself to achieve goals, says a bestselling author, musician and CEO who inspires leaders around the world. 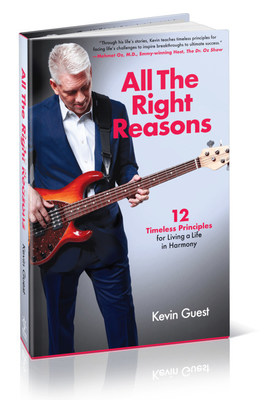 "Successful people do a good job of motivating themselves to take action each day," said Kevin Guest, chairman and CEO of USANA Health Sciences (NYSE: USNA), and author of All the Right Reasons, 12 Timeless Principles for Living a Life in Harmony. "With the right inspiration, I have seen that anyone can become more productive."

"Find an activity that energizes you. Use music, books, quotes or movies for motivation," said Guest. "Maybe you have a certain movie scene or song that motivates you. For someone else, it might be a favorite quote. Inspirational videos found online only take a few minutes to watch. The key is to start and end the day with something that inspires you to take action.

"One thing that can energize you is a good exercise routine that increases your heart rate and sends oxygen to your brain, which will refresh you, help you think more clearly and feel more like doing your work."

Raised in Montana, Guest, whose billion-dollar nutrition company operates in 24 markets around the world, was always active in nature and with physical activities.

"Get started early in the day. I've found if you can accomplish something worthwhile before 9 a.m., you'll be motivated to do even more during the rest of the day," he said. "If you fail to do anything substantial by noon, you might feel bad about how you've wasted the morning.

"Often, you won't feel motivated in the afternoon and will likely stall progress by putting things off until later."

Guest applies his early-to-rise habit to everything, including before he performed at Grand Ole Opry with country star Collin Raye, he writes in his book.

"I arrived in Nashville early, interacted with country music idols, and had a great experience when I went on stage, which was a complete turnabout from my first Opry performance. All this was because I was early and prepared, which put me in a calm frame of mind," he said.

"Dividing bigger goals into a series of small steps is a huge secret to success," he said. "What's more, accomplishing goals rapidly motivates you to the next one. I've also found it's key to celebrate and reward yourself for a job well done, and with small steps, rewards come often."

Finally, the international leader says to realize that nothing changes until your behavior changes.

"Visualization and positive self-talk have their place, but they're only effective if your behavior changes," Guest said. "You can wish your way to make a million dollars by aligning with your values, but it won't happen unless you're consistently doing something different. That's the key to real change."

All the Right Reasons is packed with Guests' experiences with celebrities and regular people who taught him lessons for success. From being influenced by his parents, who owned a Montana lumber mill, to interviewing KISS' frontman Gene Simmons when he was arguably the biggest rockstar in the world, Guest captures experiences that have helped him go from being a teen fixed on becoming a rockstar to chairman of a billion-dollar company.

"Most of all, I know life is short, but it's long enough if we don't waste time," he said. "Simply put, we can accomplish a lot between now and the end of our life if we respect and make the most of our time. It's easy to put things off until tomorrow, but there are only so many tomorrows left."

Written specifically to help others find success secrets, All the Right Reasons uncovers 12 principles for living a life in harmony. All proceeds from sales of the bestseller are directed to feeding two million meals to hungry children. Available on Amazon, the book provides 40 meals for each single purchase.