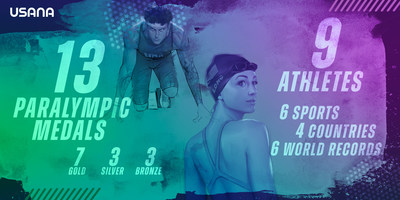 Breakout star and dual athlete Mayhugh made his Paralympic debut in athletics after seven-a-side soccer was excluded from this year's Games. Having only taken up sprinting 18 months prior, the Virginia native quickly became a household name. In his kick-off event, he broke his own world record to become the first, and fastest, T37 athlete to run the 100-meter dash in under 11 seconds. Mayhugh left Tokyo with medals in each of his four events, the men's 100m T37 (gold), 200m T37 (gold), 400m T37 (silver), and the 4x100m universal relay (gold)—setting five world record times and two American records.

"To go to Tokyo and represent my country on the biggest stage is something I've always dreamed of." says Mayhugh. "I dedicated everything I had physically, mentally, and emotionally to the sport of track and field the last year and a half. To come home having medaled in every event and with a handful of world records means everything to me. It's a testament to all the hard work my brother, team, and I put into my craft. I hope it inspires those watching at home that no matter what life has dealt you, you're in control of your own limits. If you believe in yourself and work hard you, too, can be a champion."

"It has been so special being in Tokyo and having so many people follow along these last few weeks," says Long. "The support I have received has been out of this world. Seeing how much the Paralympics have grown since my first Games is incredible! Thank you everyone for the special words of encouragement."

To learn more about USANA and its award-winning supplements, visit USANA.com.

"These athletes are truly inspiring. We congratulate all their outstanding performances. From breakout moments to historical podiums and impressive debuts, they represented USANA and their respective countries with class and grace. We are proud to be a part of their team," says Dan Macuga, USANA chief communications and marketing officer.

The mentioned athletes are either Associates or dedicated USANA product users who have received compensation and/or complimentary USANA products for their partnership with USANA.

About USANA
USANA (NYSE:USNA) prides itself on providing consumers the highest quality nutritional products in the world. From its award-winning supplements to its innovative skincare line and new active nutrition, USANA has proven for nearly 30 years why it's a company you can trust. How about giving us a try? Shop at USANA.com or learn more at whatsupUSANA.com.