Hundreds of Elite Filipino Athletes to Benefit from USANA Nutritionals 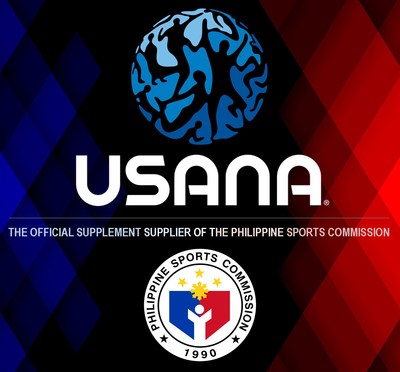 Learn more about the thousands of other elite athletes who trust their health to USANA at teamusana.com.

"The timing of this partnership with USANA could not have been more perfect," said PSC Chair William Ramirez. "We are in full swing with our preparations for the upcoming international competitions and adding USANA's high-quality nutritional supplements to our athletes' health program will help in their training while reaching optimal health as well."

Through the partnership, USANA will help the PSC-PSI promote sports and athletics among Philippine youth, as well as assist in the overall improvement of the national athletics program.

"It is a privilege to work with the PSC-PSI in their goal to get our athletes ready to represent our country in the international sports arena," said Aurora Gaston, USANA vice president for Philippines and Indonesia. "We are proud that we are able to provide Filipino athletes the same pharmacy-grade nutritional products being enjoyed by thousands of world-class athletes. This partnership is our commitment to the Philippine market who has helped our company become the leader in nutrition here and abroad."

This is not the first time the nutritional company has given its support to Filipino athletes. Through its Team USANA Pilipinas division, over 30 national athletes have received sponsorship from USANA including weightlifting silver medalist Hidilyn Diaz, Southeast Asian Games gold medalist Nikko Huelgas and soccer star Misagh Bahadoran of the Philippine Azkals.

"Team USANA first originated from our relationships with US Speedskating and Speed Skating Canada in 1999, and has since grown to include thousands of athletes and teams internationally," said Dan Macuga, USANA chief communications and marketing officer. "Being able to reach and attract these elite competitors is a testament to USANA's commitment to excellence in producing pure and high-quality products that even the most accomplished athletes can trust."

USANA's sponsorship of the PSC-PSI is the latest initiative of USANA's ongoing sponsorship program. More than 3,000 athletes receive USANA product in over 20 countries, including the Women's Tennis Association, US Ski and Snowboard, Speed Skating Canada, the Korean National Judo team and most recently China's General Administration of Sports Training Bureau through its China subsidiary, BabyCare Ltd.

*The mentioned athletes are either distributors or dedicated USANA product users who have received compensation and/or complimentary USANA products for their partnership with USANA.

About USANA
USANA, The Cellular Nutrition Company (NYSE: USNA), is a U.S.-based nutritional company founded in 1992 that manufactures high-quality supplements, personal care and healthy products in its state-of-the-art facility in Salt Lake City. Learn more about USANA by visiting our website http://www.usana.com or the official USANA blog http://whatsupusana.com.