SALT LAKE CITY, Dec. 4, 2018 /PRNewswire/ -- USANA, The Cellular Nutrition Company, has partnered with some of the world's most skilled winter Olympians since 1999—dominating the winter field with partnerships across seven national governing bodies throughout the United States and Canada. The Utah-based company will now, for the first time, partner with a national summer sport organization by becoming the Official Supplement Supplier of USA Wrestling and the USA Wrestling Program. USANA will provide the National and World Team members its NSF and LGC tested supplements as they prepare for Tokyo and beyond. 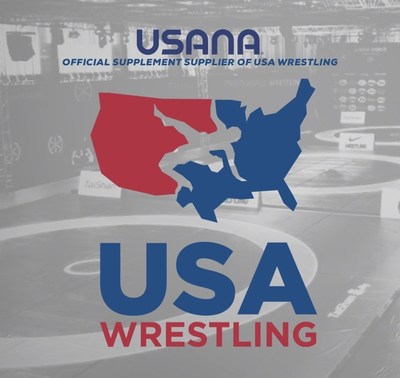 Learn more about the thousands of elite athletes who trust their health to USANA at teamusana.com.

"USANA has partnered with astounding athletes and organizations for nearly 20 years, but we have never had the opportunity to work with a summer organization like USA Wrestling until now," said Dan Macuga, USANA chief of communications and marketing. "We are excited to enter this new space and work with this diverse group of athletes as they represent our country. We look forward to assisting them on their individual journeys to Tokyo and to support the sport of wrestling overall."

Each year, USA Wrestling charters over 4,500 wrestling clubs and sanctions over 2,100 local, state, regional and national competitions, supporting over 237,000 members that include athletes of all ages, coaches, officials, parents and fans striving together to strengthen the sport.

"Nutrition is vital to our performance at the international level. It's paramount that any supplement our athletes take are held to the highest standards of testing to ensure USADA and WADA compliance," said USA Wrestling Executive Director Rich Bender. "USANA's reputation in the Olympic Movement has set them apart and we are proud to be the first summer NGB to partner with them."

"I'm really excited about our new partnership with USANA and to have the opportunity to work with this company," said Hildebrandt. "Nutrition is such an important thing to me, and, well, all wrestlers, so this is a perfect fit. USANA offers so much that I think is key to elevate my performance to continue to improve and, even more importantly, stay healthy."

About USANA
USANA, The Cellular Nutrition Company (NYSE: USNA), is a U.S.-based nutritional company founded in 1992 that manufactures high-quality supplements, personal care and healthy products in its state-of-the-art facility in Salt Lake City. Learn more about USANA by visiting our website http://www.usana.com or the official USANA blog http://whatsupusana.com.